Developers are typically trained to look out for and guard against logical errors that have been accidentally introduced to their code. Such errors will range from forgotten edge cases that have not been handled to logical bugs that cause entire systems to crash. But what about the more subtle issues that don't affect the way the system works? For example, the design issues that make the system hard to maintain, and increase the chance of bugs in the future?

A code smell is a surface indication that usually corresponds to a deeper problem in the system.

Code Smells are signals that your code should be refactored in order to improve extendability, readability, and supportability.

Below describes some of the most common code smells that, when caught early, should not be too difficult to address:

The majority of a programmer's time is spent reading code rather than writing code. Apart from the difficulty of having to keep a lot of complex logic in mind whilst reading through a long method, it is usually a sign that the method has too many responsibilities. Long methods make code hard to maintain and debug. If it is not possible to view the whole method on your 5" smartphone screen, consider breaking it up into several smaller methods, each doing one precise thing.

If a class inherits from a base class but doesn't use any of the inherited fields or methods, developers should ask themselves if inheritance really is the right model. Signs of this code smell may be that the inherited methods go unused, or are overridden with empty method bodies. For example:

Inheritance should be used when a class wants to reuse the code in its superclass. If the classes diverge and the subclass no longer needs that functionality, the hierarchy should be broken and delegation considered instead.

Alternatively, to keep some inheritance, remove the unused fields and methods from the subclass and create a new layer that the objects can inherit from. For example: 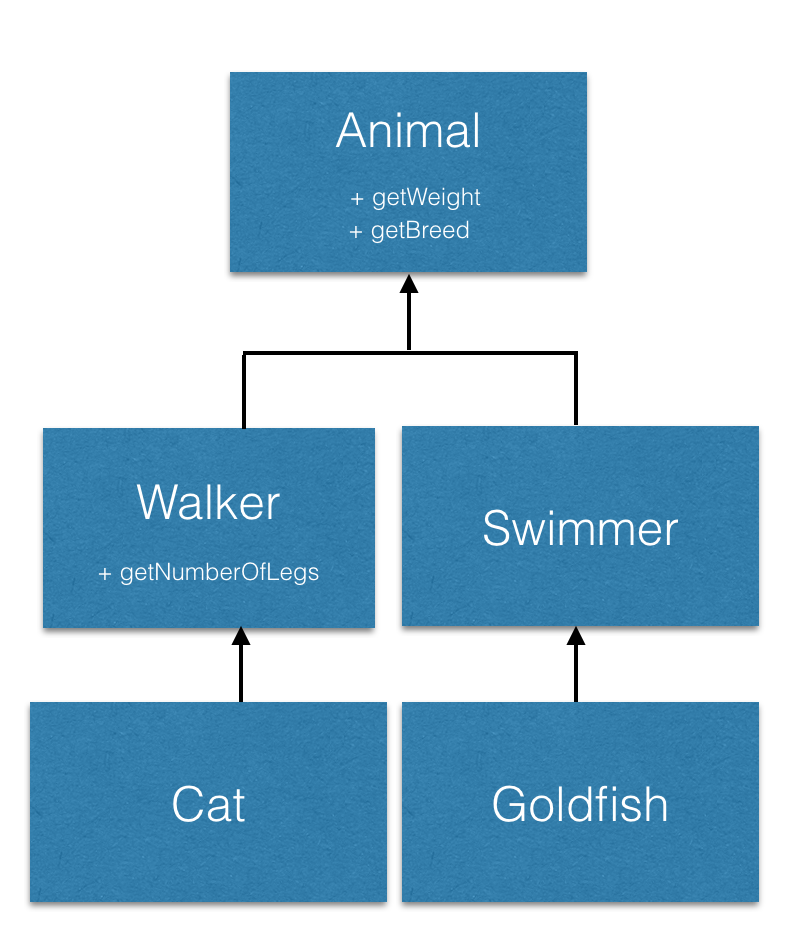 Where multiple method calls take the same set of parameters, it may be a sign that those parameters are related. To keep the group of parameters together, it can be useful to combine them together in a class. This can help aid organisation of code.

It's been known for a developer to fix a bug, only for the same symptoms to then resurface in a slightly different part of the system. This can be the result of code duplication, and a bug being fixed in one occurrence of the imperfect code but not in the duplicated versions. This poses an overhead in terms of maintenance. When developers are not aware of the duplication, they only know to fix the occurrence they have come across.

Be on the lookout for repeated code blocks and extract them out into a single place—don't repeat yourself!

When a class exists just to delegate to another, a developer should ask themselves what its real purpose is. Sometimes this is the result of a refactoring task, where logic has been moved out of a class gradually, leaving an almost empty shell. For example:

For every class that exists, there is an overhead of maintenance. Make sure the class justifies its existence, and if it doesn't, go ahead and remove it.

Primitive types give little in terms of domain context. A String id field could ultimately contain any sort of value. Where primitives have a domain meaning, wrap them in a small class to represent the idea. Often the class is expanded to include methods to add to the class.

Can comments be trusted? Where comments are re-iterating what can be read by a developer, they may provide little value, especially when they have not been updated and no longer reflect the intent of the current code.

Rather than adding a comment to clarify a piece of code, think about whether the code can be refactored such that the comment is no longer needed.

It may be possible to provide a more descriptive name that provides the same clarity as the comment, meaning the comment can disappear, resulting in more intuitive and readable code.

Just because the code isn't difficult to maintain or extend now, be on the lookout for code smells so that small refactoring can be made early to prevent larger problems in the future.

Whilst only a handful of examples have been described in this article, become familiar with the different categories of code smells, and see which ones are most prominent in the project you are working on. Share the solutions and refactorings amongst the development team so that going forward your code becomes less smelly and more sleek.